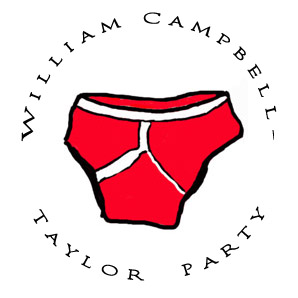 Some time ago, Occupy Faith UK (OFUK) employed someone to write all our gags. As serious people engaged in serious work, we felt it would dilute our mission to dedicate any of our scant emotional and intellectual resources to formulating funny. In this respect, we were ahead of the curve – outsourcing of cognitive experiences overseas is to be a fundamental plank of the next Conservative manifesto. But we digress.

Anyway, we set out to employ someone Jewish for the purpose. This was not only because Jewish rates are, generally, exceptionally competitive; Judaists are also perhaps the people most accustomed to, and comfortable with, the notion of self-ridicule. However, being an equal opportunities employer, and not wanting to fall foul of employment discrimination laws, we expanded our desired employee demographic to include anyone lacking a foreskin.

We eventually hired a young lad called Isaac. Things went swimmingly for a while – and he was quite amusing, in his own way – but he was eventually fired after a fateful incident in a urinal when one of the OFUK team clocked he was very much replete with a prepuce (we weren’t trying to peek, honest). Such was our total lack of a sense of humour about the situation, we then took Isaac to court for making fraudulent representations in his job interview, false advertising, damaging our reputation and extortion. His defence was “I was only trying to make people laugh.”

The jury may have sympathised with his position, but using our contacts within the British establishment, Isaac’s conviction was a formality; he was duly found guilty, bankrupted by insane costs and damages fees, and banged up for an extended period in a particularly badly managed PFI prison.

We mention Isaac because he hung himself in his cell last week. It was at that point that we realised OFUK had gone a bit too far – for, when Isaac died, the laughter he produced died with him. It became apparent that we’d simply used the law as a tool for getting even with someone we didn’t like, who hadn’t really wronged us in any tangible way – and in the process, had made ‘chuckle crime’ a hanging offence (literally). We resolved to stop taking ourselves so seriously – and our opponents too. After all, who doesn’t like – and, in fact, need – to laugh regularly? We pledged that, from then on, we would write all our own material.

We then fired the six Jews we’d employed after Isaac’s acrimonious departure, and dragged them through the courts for no good reason whatsoever. Perhaps, in retrospect, we were a bit drunk on religious power. Or maybe it was the blood of Christ – we don’t remember.

I also mention Isaac because, just before he nipped to the OFUK bathroom for that fateful piss, he was working on a cracking gag (or so he said) about a Priest, a Rabbi and an Imam – in a courtroom. We never got to find out the punchline, sadly, but we imagine it wouldn’t have gone anything like this…

“A Rabbi and an Imam are about to walk into a courtroom. You see, said Priest is trying to have said Imam done for harassment…”

The Imam’s misdemeanours are multiple; he produced a line of underwear emblazoned with the Priest’s name (see below), had once offered to circumcise him in the Abrahamic covenant, and all his mates support this widely-lauded political party insinuating that the Priest was pants. The Rabbi plays no part in the proceedings.”

Is that funny? Is that a joke? Would the Rabbi need to play a more integral part for this to qualify as joke?

The answer to those questions may seem frivolous, but they are also deadly serious – because, as well as being a joke, it is also completely true (except for the bit about the Rabbi).

The Imam, our pal Muhammad, is a notorious practical joker and an activist on clergy abuse of power with abuse survivor organisations.  The Priest, William Campbell-Taylor, is threatening Muhammad with the law because he produced a range of underwear featuring the cleric’s name, while the revered “William Campbell-Taylor is Pants Party” is celebrated by its multiple activists and supporters as a sure win at the forthcoming General Election. This is part of an ongoing cause that ourselves and our friends champion of preventing narcissistic faith leaders from using their religious standing to gain political influence, lie and cheat, charm and manipulate, and trample on little people in the process. This has included our prankster friend challenging Campbell-Taylor in lawful public protest, having exposed his politician dishonesty, and laughing at William the clergy-come-politician (the latter being an accountable public official), when in his never-ending political manoeuvres the latter has crossed the ethical line of hurting people, while still using cynical buzzwords like “the Common Good” as ends to justify his unscrupulous means.

In this particular case, the timing of this legal attack is very sinister as it was actioned by William Campbell-Taylor exactly and immediately after a public meeting in Parliament of clergy abuse survivors and legal experts where Campbell-Taylor’s behaviour was named, and for which Campbell-Taylor and colleagues had employed a nasty scandal management company to put pressure on the meeting and try to block publication of the film footage on YouTube. The legal bullying by Campbell-Taylor can be interpreted as an attempt to punish a whistleblower who had exposed and alleged misuse of religious power by a manipulative Priest, in a way which – quite independently – we ourselves in Occupy Faith have also witnessed.

As ridiculous as it is, part of Muhammad’s legal defence now hinges on proving that producing these pants was an attempt at humour, the natural wit of a fun prankster personality which anyone who knows our friend personally - including Campbell-Taylor – already knows to be the case. That his protest was a joke aimed at challenging the Priest’s political shenanigans in the public interest. That our pal was not harassing or defaming William by insinuating that he was literally a set of underwear.

Isaac’s dead now, so he can’t help us out. But perhaps you can. It is very much incumbent upon us all now to declare that we find this funny – indeed, we believe it to be a joke. To declare our objection in the strongest possible terms to the criminalising of humour as a form of dissent and protest. To indicate that William Campbell-Taylor can only be cast as figuratively, rather than literally, pants. The future of cackling depends on it. 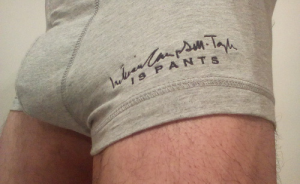 TO BUY YOUR VERY OWN LIMITED EDITION WILLIAM CAMPBELL-TAYLOR PARTY OFFICIAL UNDERPANTS, AT A BARGAIN PRICE OF £15, PLEASE E-MAIL US WITH YOUR DETAILS AND SIZE (S, M, L, XL) TO INFO[AT]OCCUPYFAITH.ORG.UK – REPLACING THE [AT] WITH AN @ SIGN.  COLOURS AVAILABLE ARE GREY, WHITE AND BLUE…HURRY WHILE STOCKS LAST… 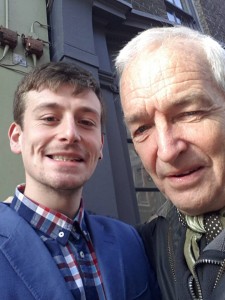 This statement was composed by Occupy Faith’s in-house wit, raconteur and generally awesome dude, Kit Klarenberg (on the left…)