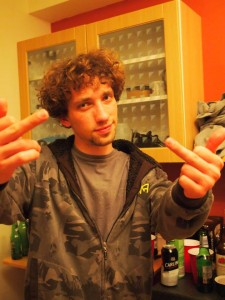 Thanks and solidarity with Naffy and Pedro for making this video

From the Tao Te Ching

“When a ruler’s palace is full of treasure,
the people’s fields are weedy and
their granaries are empty.
If the ruler wears fancy clothes and
his house is full of weapons,
if his table is laden with extravagant
food and drink and everywhere one
looks he has more wealth than
he can use, the ruler is a
robber and a thief.
This is not in keeping with Tao.”
———-

“The purpose of all action should be to raise the consciousness of the species. drinking alcohol, smoking tobacco and complaining about ‘the system’ is not productive. we as the so called 99% cannot complain about the global economy and then support it by poisoning ourselves with drug foods that we have paid tax on. Vote with your wallet. to combat a global system we must localize our economy and means of production and thus our consumption. if we localize to an extreme then we become individuals. we each should take individual responsibility for our actions and the state of the world, instead of pointing fingers we need to dissolve our egos. it is an impossible task to capture a feeling with a word, but what i have said is what i feel (or as close to it as i can reach).

because of this i feel the occupy faith movement is a sensible mature and appropriate response to the occupy wall st (etc) movement. spirituality is the key to a better future and a higher race. if we embrace each person as ourselves then we can learn to understand.

everyone is selfish, greedy, shallow and fueled by their ego. even gurus masters and teachers. to embrace this is to understand. and that i think is the first step in overcoming. (why else would the military employ social scientists to study a country BEFORE they invade it??)

Humble Pious of the Kojak Brothers and the Brewdem

“Never has there been more need to call for justice then in recent times. We have a government that are destroying the lives of working class people and their families, from cuts to jobs, pay, pensions to destroying  services and facilities that communities rely on. The cuts have a negative disproportionate impact on race, gender and disability grounds. Over a million young people are unemployed and the slashing of EMA and tripling of tuition fees means the poorest, disproportionately black, young people are barred from education.  We have a police force that is institutionally racist, black people are subjected to stop and search 30 times more than white people, deaths at the hands of the State are on the increase with families forced to fight through a judicial system that is biased against the poorest. These attacks lead to deprivation and discrimination and are an injustice to those bearing the brunt of them. We all need hope, faith and belief of some sort to see us through the battles we face. Whether that is  of a religious kind or not, we gain the strength to carry on our quest for justice. What better way to assert our right to justice than by coming together with others in a peaceful but determined show of strength. Congratulations to Occupy for organising this. We offer our support and solidarity.”

My reasons for supporting the pilgrimage for justice are as follows.

“OCCUPY will not die. OCCUPY Faith’s pilgrimage for justice helps ensure that. It is time for a robust non-violent campaign which keeps going until some government or other ensures that the powerful financial sector works for the common good and accepts that the degree of poverty in this wealthy nation is unacceptable; until million pound bonuses are curbed, offshore tax havens ended and all land in the UK is registered and taxable in the UK, not registered overseas and put out of reach of the taxman. OCCUPY has given people hope that there are enough of us willing to challenge government and the centres of financial power. I live in Tottenham. I have seen what happens when hope runs dry”.

I  think the great achievement of the Occupy Movement in London is that it has made churches and others  face up to the real and divisive issue of wealth and poverty in our country and world today.

The pilgrimage is a wonderful idea. It will take that message to what is the mother church in this country– Canterbury cathedral.

At a time when politicians attempt to divide us based on faith, heritage and background, initiatives such as Occupy Faith have an important role to play in uniting our diverse communities. We are one society, many cultures and all the more stronger for it. I commend the efforts of all involved and hope that the student movement and the Occupy movement will continue to support and inspire each other.

We are pleased to be supporting the ‘pilgrimage for justice’ by Occupy Faith. We believe that faith groups are a progressive force for change and are instrumental in highlighting the economic and social inequalities that exist today. We hope that all communities will support this initiative and take a moment to contemplate on how we can improve our society for all mankind.

Being together with all sorts of people from different walks of life is a step towards a fairer, more caring society. Spending time listening to other people and sharing ideas and resources has got to be better than all staying in our separate little worlds.

“UKC Anti-Cuts challenge and oppose the political dialogue of austerity and ‘necessary’ cuts. The Pilgrimage for Justice and Building a Just Society conference are a brilliant piece of combined political resistance which will hopefully provide alternatives for the shared equity of all. We are happy to endorse Occupy Faith UK in these ends, and look forward to providing what assistance we can when they arrive in Kent.”

Let’s tap into the Queen’s Jubilee in England and transform it into its original meaning. We reclaim the term ‘Jubilee’ as good news for the world today, basing our pilgrimage on the following Scripture/s:

‘The Spirit of the Lord is on me, because he has anointed me to preach good news to the poor. He has sent me to proclaim freedom for the prisoners and recovery of sight for the blind, to release the oppressed, to proclaim the year of the Lord’s favour.’ (Isaiah 61: 1, 2 and Luke 4: 18, 19).

So to turn that into an easy to remember sound-bite for media and purpose statement for the pilgrimage of Justice:

‘We commemorate the Queen’s Jubilee in England, but this pilgrimage is about celebrating God’s Jubilee for the world. Jubilee was originally designed as a deeply subversive, spiritual practice, not to entrench the status quo, but to share power among all. So as we walk and respectfully blow our ram’s horn, we declare an unshakable trust in God’s Jubilee promises for our world today. Jubilee means to proclaim freedom for the prisoners, sight for the blind, to release the oppressed and to proclaim that God’s desire for love, equality and justice will prevail over all forces of greed, intolerance and injustice. Jubilee means that no person can permanently remain oppressed, in debt or in poverty. The wealthy have to forgive the debt of the poor; they have to share their wealth because it really belongs to God. We wish to sympathise with the 1% in all earnestness and say that while they probably do not have the will, strength or depth of character to do the work of Jubilee themselves, they need not worry: God promises to do it for them. We are here simply to remind the 1%, the powers whom they serve and indeed the 99% of these inevitable outcomes.’

Posted in Uncategorized | Comments Off 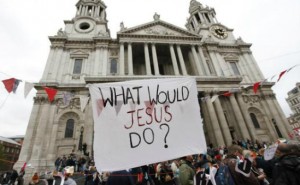 Occupy Faith UK wishes to champion faith as something by the people, for the people. Taking ownership of the Self and entering a space in which the corruption of society has no power and no jurisdiction. We wish to facilitate community minded initiatives and actions motivated from this place. We all walk our own paths, and many of the paths carved from faith values are converging with the the global Occupy movement. We wish to provide a route that allows anarchists and Anglicans to walk together in solidarity. We also will raise a dissenting voice if religious institutions stray from the path.

Occupy Faith exists to swing the iron sword of justice across the collars of the corrupt, to shine a prophetic light on the collusion of establishment religious bodies with power and corrosive political influence. We catch ecclesial power with its pants down, we out the pretence of religion as mere ritualised hypocrisy at sub-zero temperatures, and a startled world finds itself in the headlights of truth-seeking and justice.  When the intercourse of church and state shudders to its toxic climax, our pen of truth-telling flashes out of its scabbard.  If you have been mis-sold a heavenly life insurance policy you could be entitled to compensation, or if you’ve been touched inappropriately by one of God’s alleged representatives, show us where.  Truth in tablet form.  Throw the moneychangers out of the temple, the only gems on our collection plate are your opinions.  We want to hear from you.

If you are involved in community building and would like our help organising events, if you are interested in our events, or if you would like us to talk to your parish about the shared values of faith and Occupy, we would love to hear from you. Unfortunately religious bodies are not above immorality or coercion from business and political interests. Funding bodies are more generous to some faiths than others, funding for faith events can be squandered or misappropriated, and the piety of the cloth can often veil violent or sexual abuse.

If you, or anyone you know, are aware of victimisation or abuse of, or by, a religious institution, and would like our legal, emotional, or ethical support, please write to us, via the e-mail address below.

Write to us at:  info [at] occupyfaith.org.uk (substituting an @ sign in place of the [at])

Occupy Faith UK is an autonomous organisation that has an affinity with the global Occupy movement. We engage with the values that faith communities and those with other spiritual and political faith share in order to raise awareness of issues of social, economic and environmental justice as they affect communities across the UK. We welcome collaboration and are proud that the Pilgrimage for Justice is also supported by many organisations, including faith organisations working on social and economic justice.

We are of diverse ethnicities, backgrounds, genders, generations, sexualities, dis/abilities and faiths, standing together in engaged, transformative action for:

Write to us at:  info [at] occupyfaith.org.uk (substituting an @ sign in place of [at])

The Webmasters for this site are:  Alan Bolwell, Kit Klarenberg

Posted in Uncategorized | Comments Off