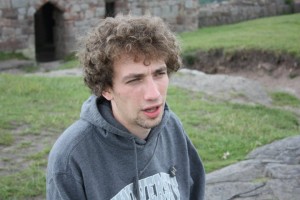 Following the Pilgrimage for Justice and Building a Just Society conference a small group that were involved have decided to engage in non-faith based charity. Occupy Faith are dedicating this space on our website to promote the newly forming charity Bin Today, Gone Tomorrow because although we have different motivations, we share the same goals.

We are a group of self-organised and socially minded friends who plan to establish a food redistribution centre in Canterbury. This idea had its origins with a group of friends living off of refuse food removed from skips, who would regularly bring home far more food than they could possibly use themselves or even give away, which we often do. We are disgusted by this excess of waste and want to find a way to redistribute good, unwanted food to those in need on an industrial scale, to make use of the surplus of society that would otherwise go to waste. Collecting food from skips is illegal, but we have been in touch with legitimate redistributors (including Sainsbury) who have offered us large quantities of food if we acquire a charity number and premises.

As is mentioned above, in order to put our plan into action we will first need a registered charity number. This will require three named trustees, a treasurer, and a secretary. It seems at this point relevant to discuss the nature of the organisation. This project was conceived in, and at all times must adhere to, a philosophy of friendship. In becoming a charity certain positions and responsibilities must be assumed, however, these roles cannot be allowed to affect the power dynamic of the group. Every member will have the same rights within the organisation and the same amount of influence over the course of the movement. As such the same level of conscientiousness will be expected from all members. Nobody will be guaranteed a wage or position of authority; the secretary, trustees and treasurer will oversee the legalities of our plans, while all decisions will be based on a group consensus arrived at in meetings including all available members.

It will be necessary for us to procure a space for the organisation to operate from. The premises should allow space for a kitchen; a dining space, which, weather permitting, can be mostly outside; a gallery; and art and recording studios. We do not require a garden as it will be possible for us to acquire an allotment, however a garden on site would be a bonus! We are hoping to rent a currently unused building next door to the Canterbury Wholefoods shop and Veg Box Café in the centre of Canterbury. We also hope to come to an agreement with the proprietors of Canterbury Wholefoods and the Veg Box Café that will allow us access to food to supplement the refuse we will be receiving. It should be noted that the gallery will be run by the No-Wave media group who will retain artistic direction of the art gallery.

The first and foremost aim of Bin Today, Gone Tomorrow will be to prepare and provide a meal for whoever requires one. Some of the food will be supplied to us for free by our distributors, but it will also be supplemented by the proceeds of the art and music we sell. We will also accept food as donations! We wish to create a stable micro-economy in which we consume largely food that would otherwise go to waste and produce beautiful art.

An established independent arts and media group called No-Wave, based in Canterbury, have agreed to work with us on this project. We intend to provide a gallery space for art produced by local artists, and a recording studio for local musicians. We believe that creative expression is essential to a properly functioning community, and want to provide what is necessary for that to flourish in Canterbury, where local artists and musicians are abundant but largely undiscovered and underappreciated. By allowing these local artists and musicians to produce, sell and exhibit their work with us, we hope to inspire new developments in the arts scene in Canterbury, put artists and musicians in contact with one another, give a platform to resistance art, and, not least, provide a financial supplement to both the artists and Bin Today, Gone Tomorrow. Further to this, we hope that by providing a free space and materials we will encourage our members and the public to get involved with making and sharing art and music, to both their benefit, ours, and that of the wider community.

It is a long term goal of Bin Today, Gone Tomorrow to license retailers of art works so that music and art could be sold off premises by venders on a similar basis as the Big Issue magazine.

As mentioned above, we intend to acquire a garden or allotment in which to grow food and teach others how to grow a few essential vegetables and pulses. This, as all our efforts are, will be open to anyone, and we hope to help those who wish to get involved to grow food in sustainable and eco-friendly ways, providing the necessary training and assistance. We will make connections with organisations such as the Transition Network and the Permaculture society to develop this aspect of our plan.

We aim be able to connect anyone who comes to us with all the relevant support that is available. This will involve working with other organisations where required, such as Catching Lives, Shelter, Green and Blacks, etc.

js512@kent.ac.uk
This entry was posted in Uncategorized. Bookmark the permalink.